Frederick Burgess was the son of Violate Stockwell and William Burgess Sr. He was born 5 February 1827 in Hague township, Warren County New York. Frederick was four years old when his parents were baptized members of the LDS Church and he was five when his family moved to Kirtland, Ohio to join the group of LDS members living in that area. Frederick's childhood was somewhat turbulent as his family moved to Missouri where their home was burned and they were forced out by mobs. They fled across the river to Illinois where they took refuge; first in Adams County and later moving to Nauvoo where they were living at the time of the martyrdom of the Prophet Joseph Smith and his brother, Hyrum. Frederick was baptized in Nauvoo on 6 October 1843.

Frederick Burgess was my second great grand uncle. Frederick Burgess left home after a family disagreement. This happened while the family was still in Nauvoo before the journey to Utah so he would have been in his late teens. We know very little of him after he left. He is mentioned in two family books-

In the book, "A Heritage of Faith and Courage - William and Violate Burgess and Their Family" by Barbara Bennett Roach it states:

A tradition is that one time some young men were wrestling and boxing in friendly sport,
then serious trouble came up with a fight between two boys which became really troublesome.
Fred was red headed and would go the limit in a fight. He hurt the other boy very bad. His father
interfered and wanted him to apologize, but he would not. He thought everyone, and his own
family were against him. He left home and never came back. He went south and got in bad
company and went from bad to worse, and finely took the lead ofa gang known as Quantrill, and
was later one of the night raiders in the Civil war. He came west to see his mother, but did not
claim to be her son, said he was a friend of Fred Burgess, who wanted him to call on her and give her a message from her boy. She said, "You are my boy Fred." But he said , "No, he was just his friend." At that moment his father was coming in the front gate. She said , "Here comes
William, he will know you." Fred looked and saw him, then left through the back way, got on
his horse, and they never saw him any more. His father searched, but could not find him.
Source: John F. Burgess, and shared by Steven James Burgess, Ogden, Utah

And in the Perry A. Burgess Diary - 1866 (Perry was the son of Frederick's brother, Abram) which is a part of the book "Beyond the Land of Gold: The Life & Times of Perry A. Burgess" by Rebecca Valentine and Travis Thompson we read:

"April 17. Hitched up and travelled until three o'clock when we came to the Missouri River, passed through Glennwood [Glenwood} 7 miles east of the Missouri. It commenced raining and as we reached the river we were obliged to wait an hour or so until the ferry boat came and set us over to Plattesmouth [Plattsmouth], Nebr. territory. The river was very swift and muddy and the bank kept dropping down as the currant of water undermined it. At Plattesmouth I was introduced to my Uncle Fred Burgess whom I had not seen for 21 years. The country we traveled over today was hilly, but well timbered. Distance to-day 20 mi."

"Stayed in Plattesmouth 7 days.  ... Plattesmouth is a dirty place and drinking, fighting etc. are the principle amusements, there was two shooting brawls during my stay there. At one of them there were 30 or 40 shots fired and no body hurt although one drunken man in crossing the street fell down and scratched his face a little and stoutly maintained that he had been scratched with a bullet or knife but did not know which...."

The previous two mentions as well as his brother, Harrison Burgess's statement in November 1846 that "My other Brother Fredrick had gone to Galena and has not been heard from since" were all that we knew of Frederick Burgess for over 150 years.  So last winter I decided to try and find him...

I first looked into the claim that he'd been a part of Quantrill's Raiders. Quantrill was a confederate guerrilla operating in Missouri so there was a chance that Fred could have been a part of his raiders. He is not one of those listed but there is one mention of a W.H. Burgess listed on the July 11, 1862 roster found on a dead Missouri Partisan Ranger. So it could be him if he used another name at that time. So far I haven't found him on any Civil War rosters or pension lists so maybe this is what he did during the war. Quantrill Raider reunions were held after the war so some mention of him may yet be found in a reunion article or other news item...

I began my search using census records. I found a few Frederick Burgess listings but the one that was the most promising to me was one in Wisconsin in the 1970 census:
Because this Fred's age was close to right and his profession was a lumberman (his family's chosen profession) I kept this census as a "maybe". At first I just thought this Fred and his wife might be renting rooms with Mrs. Hinton but the next day I realized Huldah could have been the daughter of Levina Hinton. So I looked at earlier census in that area and found that I was right. I found the Hinton family in the 1950 census in Stevens Point, Wisconsin:
And in the 1860 Census we see that Hulda's father, Thomas Hinton is a lumber merchant and they have lumbermen and laborers boarding with them. That could be how Hulda and Frederick met.
I found Thomas Hinton on findagrave.com showing he died 11 June 1867. There is a nice history at that site and here is another short sketch:

*Born in Ohio, Aug. 13, 1813. Came to Wausau in 1843. Engaged in lumbering. Was particularly active in the early government of the county. He was a very kind-hearted, honest man, and a year or so before his death exhibited much enthusiasm on religious subjects, devoting his time to fighting the evils visible in the community. He died in the early Summer of 1867. Source: The History of Northern Wisconsin, Marathon County, Wis. (1881) page 556

Although I wasn't sure I was on the right track I kept researching this family and Fred Burgess in that area and found the following marriage.

There are several things we learn from this listing such as they are now going by George F. and Kate and are living in Sarpy County, Nebraska. But the most important fact is the listing of his parents so... I finally found the proof that I was researching the right Fred Burgess!
I haven't yet found the family on the 1880 census but I did find them on a 1885 Nebraska state census:
So we see that Hulda's mother is still living with the family and they have a 14 year old son named Frank H. Burgess as well as some boarders.
I lose Hulda Catherine/Kate and her mother after this census. I did find their son, Frank on a 1900 census in Colorado living with a Bell family - not the same given names as those in the above census and I found him on the 1910 census in Sunshine, Park County, Wyoming. His is listed as a 40 year old single hired-hand. I haven't found him after this. 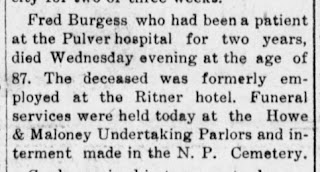 I will continue research to finish Frederick Burgess's story and would love to hear from anyone else having information on Fred and his family. --cba
=====================

Thanks to Chris Utley for finding Fred Burgess in Rosedale, Lincoln County, Nebraska on a 1910 census. This Fred Burgess is 83 years old, widowed, and he and his parents were all born in New York. And Rosedale is only 13 miles from North Platte.