Joseph Henry James was my husband's great grandfather. James H. James is the father of Michael's maternal grandmother, Nellie Mariah James Nelson.
There are a lot of histories of Joseph H. James online (see sources below) so I am just putting his obituaries here. Joseph H. James died at age 52 in an accident at his new sawmill in the Mexican colonies in 1908.  -cba
====================

Joseph H. James Dead
Word was received in Bountiful the first of last week to the effect that Joseph H. James, on of the pioneers of Sunset, Arizona but now a resident of the colonies in Mexico, had been accidentally killed on the 25th of last month.
He and a Mexican were working repairing a chute at his sawmill when a log came down and killed both of them almost instantly.
A very large family remain to mourn his loss.
His original home was in Ogden where his mother still lives.
In 1870 he left Ogden and went to Arizona in George Lake's company settling at Obed which settlement was later abandoned on account of the locality being so unhealthy. He then joined the sunset company wehre he remined until the said company was dissolved.
The spring of 1885 he moved to Old Mexico locating at Diaz. Later he moved to his present home in Hop Valley, which is about twenty miles from Juarez.
He was about fifty two years old.
Mr. James visited Israel Call, P.P. Wilber, Joseph Hyrum Holbrook Surly and Joseph J. Holbrook last fall when he and ...
Davis County Clipper 1908-05-15 Joseph H. James Dead
==================== 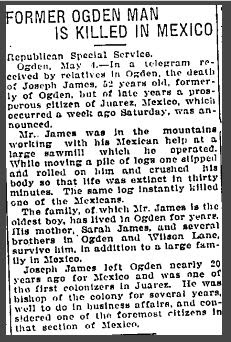 Former Ogden Man is Killed in Mexico
Republican Special Service.
Ogden, May 1 - In a telegram received by relatives in Ogden, the death of Joseph James, 52 years old, formerly of Ogden, but of late years a prosperous citizen of Juarez, Mexico, which occurred a week ago Saturday was announced.
Mr. James was in the mountains working with his Mexican help at a large sawmill which he operated. While moving a pile of logs one slipped and rolled on him and crushed his body so that life was extinct in thirty minutes. The same log instantly killed one of the Mexicans.
The family of which Mr. James is the oldest boy, has lived in Ogden for years. His mother, Sarah James and several brothers in Ogden and Wilson Lane survive him, in addition to a large family in Mexico.
Joseph James left Ogden nearly 20 years ago for Mexico and was one of the first colonizers in Juarez. He was bishop of the colony for several years, well to do in business affairs and considered one of the foremost citizens in that section of Mexico.
===================
Joseph H. James was known as a jokester. Here is a link to a page with some of his humor: J.H. James' Humor
Sources:
Utah Digital Newspapers: http://digitalnewspapers.org/
http://www.josephhenryjames.com/
http://james.forefamilies.com/jhj.html
https://familysearch.org/tree/#view=ancestor&person=KWCK-XQ3&section=memories

Posted by Cindy Alldredge at 11:21 PM No comments: