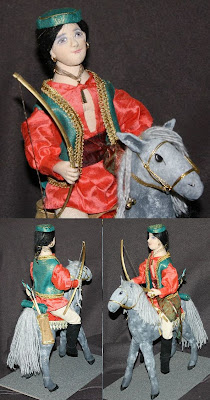 This year's Gypsy Doll Challenge's theme is "The Renaissance Gypsy".
I made a guy this year. He is now in Houston waiting for the show which is the first week of November.
He is the gypsy prince, Aden with his pony, Dawn Treader.
I sent the name, Dawn Treader, in with my insurance paper last summer but since that time I read a series of books with a Gypsy prince named Aden as a minor character so the pony became my Dawn Treader.
I used the "Dude for All Seasons" pattern by by Mary Ann Kaahanui and Bonnie B. Lewis for Aden and the horse from Susan Barmor's pattern, "Joeiel."
I didn't shrink the "Dude" pattern enough so the perspective is off but I love the pony even if he is too small. I'd never made a painted cloth animal before and I had fun.
I got carried away and even made sculpey arrowheads to make my own arrows.
I only make five or six dolls a year though so I had fun and I am always learning so much.
Posted by Cindy Alldredge at 8:07 AM