(I am going to try the 52 Ancestors challenge again this year. Last year I only got to number 10 but I'll do better this year... -cba)
Newman Van Leuven is my husband's great grandfather: Michael - Verl -Delila - Newman
-- 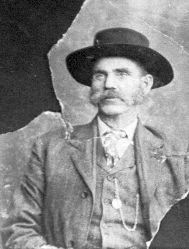 A BRIEF HISTORY OF
NEWMAN
VAN LEUVEN
Newman Van Leuven was born in Atcheson, County, Missouri on November 24, 1848.  He was the 13th child of Cornelius and Lovina Draper Van Leuven. His parents were living in Missouri after being forced from their homes in Illinois because of their religion. They lived in Missouri while working to get teams and supplies so they could join their fellow Saints in Salt Lake City. Newman's mother had 13 children of which he was the last. However only he and his two brothers, Dunham and Calvin, lived out of the thirteen.
Newman was still three years old when he journeyed across the plains with his family in the Robert Wimmer Company arriving in Salt Lake City on September 15, 1852. His family settled in Springville which is fifty miles south of Salt Lake City.
Newman received a good education for those times while growing up in Springville. He liked to wrestle, write poetry, and was a good carpenter. He became a school teacher. When Newman was 17 his pistol accidentally went off when he was riding a horse. He was hit in the leg above his ankle. He'd earlier hurt his knee while wrestling. These injuries bothered him for years.
Newman married Mariah Elizabeth Durfee on November 7, 1870 in the Endowment House in Salt
Lake City. They were both raised in Springville and had known each other since childhood. They made their home in Springville for the first five years of their marriage. Their first two children were born in Springville. In 1875 they moved to Willow Bend, Sevier County, Utah where he was postmaster and homesteaded 160 acres. He pioneered in that valley for 22 years. The town was later named, Aurora, by Newman. He and Mariah had seven more children while in Aurora. Sadly they lost their 3 year old son, Newman Franklin, when he accidentally drank lye.
Newman took a second wife as was the custom at that time. He married Adelaide Broadhead on 27 November 1879. They had five children. Ten years later he served four months in the penitentiary from October 10 1889 to February 17. 1890 for living in polygamy as he would not give up his family.
On November 24, 1897 Newman moved to Mexico with Mariah and their children. His second wife, Adelaide chose not to go with him. In Mexico it was pioneering and struggle and hard work all over again.  Newman sold his farm and home in Aurora and chartered a freight car to take the household goods and the animals, wagons and tools, and sent his son, Lafe along with the belongings.  The rest of the family went on the passenger train via Denver, Colorado to Demming, Texas.  At Demming, the wagons were fixed up and loaded with their belongings.  After a two week layover they got through customs at the border, where President Ivins met with them and assisted in getting them through the customs check.
They lived in different parts of Mexico the first two years, finally settling in Morelos, Sonora which was a Mormon community. They built a home; were flooded out; moved and built again. They worked hard to build a new life in Mexico. They were forced to leave with others by the leaders of the Mexican revolution.
In 1912 just before they had to leave Mexico, Newman had to go to Salt Lake to the hospital for his leg, he had carcinoma, or bone cancer and had to be operated on twice to prevent it from creeping into his blood system. They soon amputated and so he stayed in Salt Lake with his daughter, Lavina Ashby until late in 1914 when he came to Kaolin, Nevada where his wife and oldest son, Lafayette, had taken up some land and were trying to make a home. In late fall of 1916, Lafayette had Newman and Mariah come to Eureka, Utah where he had found work. They lived there until March 1919 when they came to Mt. Trumbull, Arizona where they made their final home.
Newman was a great sportsman.  He liked to hunt and fish.  He loved to play baseball and pitch horseshoes.  Until he lost one leg he went hunting with his boys.  He loved the gospel, and worked in it all through his life.  He was always jovial, making merriment wherever he was.  He believed that a good laugh was better than a dose of medicine. Newman and Mariah were hard-working pioneers who loved to dance when he was able to do so - square dancing, waltzes, the schottish.
Newman was always a source of inspiration to his family and all who knew him. Although he had only one leg and had to go on crutches, he certainly led an interesting and active life. He had been a carpenter by trade and made innumerable beautiful articles in the last years of his life. His hobby, however, was writing poetry. 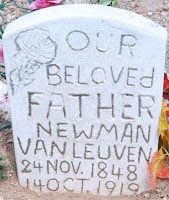 Newman loved his Trumbull mountain home on the Arizona Strip. He was happy there and said that it would be his last home on earth. It was he who laid out the cemetery for Mt. Trumbull on a lovely knoll in one corner of his own homestead. Newman died at the age of seventy-one on October 14, 1919 and was the first to be laid in that cemetery. Up to the time of his death he was full of spirit and even with the loss of one eye and one leg he still did many interesting things – went to all socials and took part.  The last social gathering he went to was a wedding at which he gave two or three comic readings, keeping everyone laughing.  He lived only two weeks after that.

Newman always advised his children to keep their eyes, ears, and minds open, as there was something new and good to be learned every day.


---
Newman wrote poetry throughout his life. It was said he wrote a poem at the death of his son that I have not been able to find. Please let me know if you have a copy of that poem. Here are links to a couple of his poems:
The Two Roads - Their Consequences by Newman Van Leuven
The Normal Class by Newman Van Leuven

Posted by Cindy Alldredge at 11:16 PM